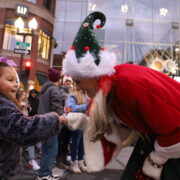 December with the return of the second annual Merry & Magical Holiday Parade on Saturday November 19 in downtown Spokane at 2:00pm.

Don your red, green, and purple when the SLFA kicks-off the 2022 Holiday Season with a festive showcase of community groups, marching bands, floats, and more, culminating with an appearance by the man in red, Santa! The Merry & Magical Parade follows an abbreviated version of the Armed Forces Torchlight Parade held each May.

“Our hardworking Parade Krewe volunteers can’t wait to bring the holidays back to the Inland Northwest,” says SLFA vice president of parade, Jamie Dedmon. “We hope that many families and friends will come out to support this new holiday tradition and ring-in in the season with us.”
Parade entries are free to Active Duty Military Groups, Veteran Groups, High School Bands and Northwest Hosting members. All other community groups are $25, and Commercial Entries are $500.

Applications for parade entries close on Friday, October 28 and can be found at www.spokanelilacfestival.org/holidayparade.

Lilacs in December continues with a Holiday Brunch on Saturday December 10 at the Historic Davenport Hotel. Early bird pricing is $40 through October 31 and tickets include a morning of family-friendly activities including carols, performances, crafts, photos with Santa and much more.

“As an organization that was founded in 1938, the Lilac Festival is no stranger to change,” says 2023 SLFA president, Sam Snow. “While the past two years were a challenge, we are excited to have emerged with new traditions and opportunities which advance our mission to honor our Military, empower our youth, and showcase our region.”

Attendees of the Merry & Magical Parade and Holiday Bruncheon are encouraged to bring an unwrapped toy to be donated to Toys for Tots. For nearly two decades, the SLFA has partnered with local Toys For Tots affiliates to gather and distribute toys for children in need. 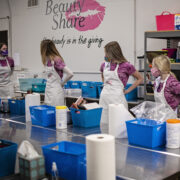 High School Senior girls interested in joining the 2023 Royal Court are required to attend one of four orientation meetings with a parent or guardian to be eligible for the Spokane Lilac Festival Royalty Scholarship Program.

The Royalty Scholarship and Training Program provides an opportunity for outstanding young women to be recognized for their achievements.  Every Spokane County high school is invited to present one senior girl for participation in the SLFA High School Royalty Scholarship and Training Program. Selection of the high school student is decided upon individually at each school.

Each candidate selected from her high school will participate in a five-week preparation course which supports character building and servant leadership with a strengthened focus on community service, integrity, and teamwork. The candidates will attend workshops in communication, personal and professional etiquette, resume development, interview skills, military history and protocol and self-defense.

Candidates will participate in community service activities such as Blessings Under the Bridge, Salvation Army, Clothe A Child and Second Harvest Food Bank